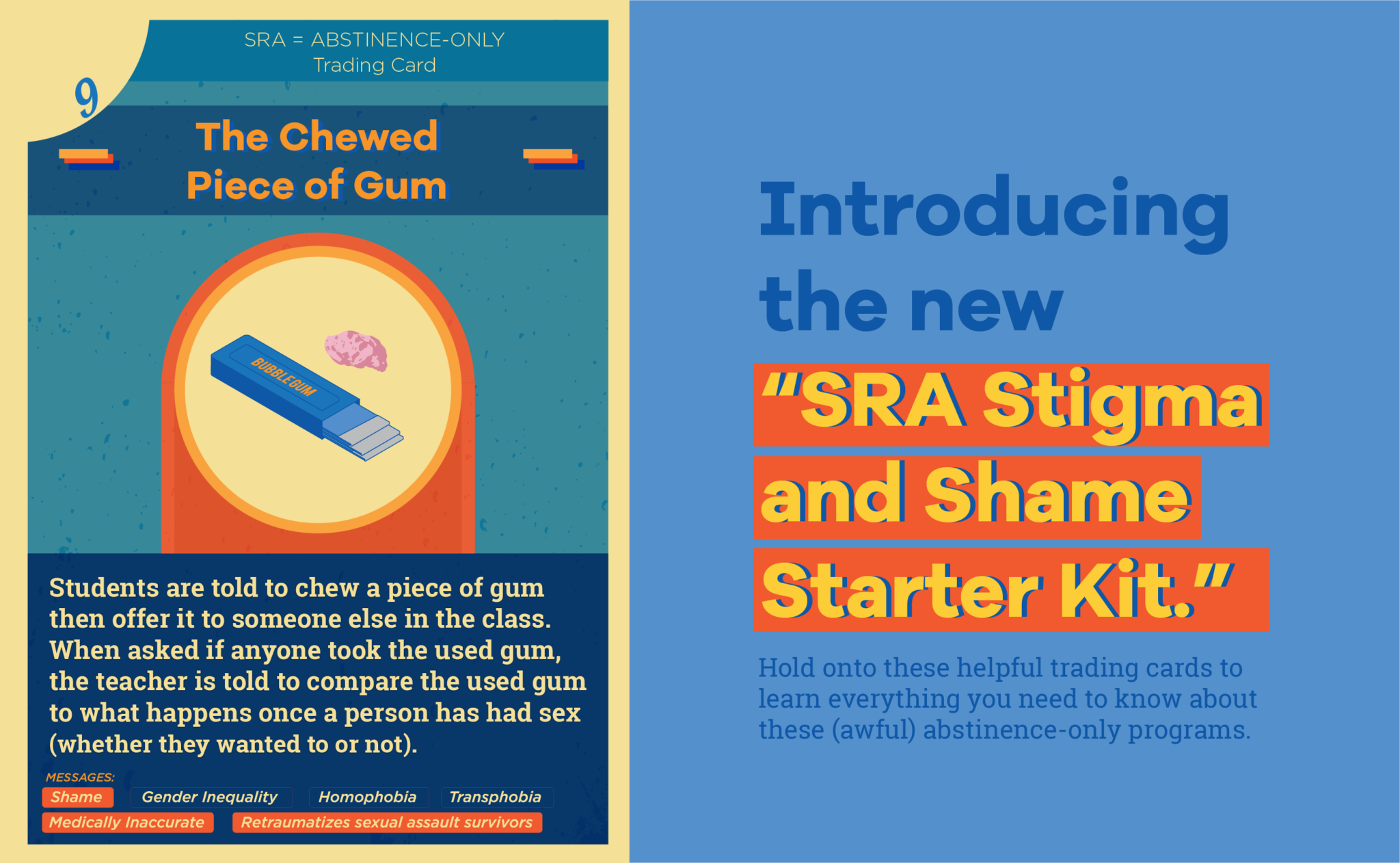 “If you have sex, you’ll become as undesirable as an already chewed up piece of gum.”
“Girls are like crockpots and heat up slowly over time. But boys are more like microwaves–they get very hot, very quickly.”

These are just a few examples of the outrageous lessons being taught within abstinence-only-until-marriage programs. And they’re being taught to actual young people in actual classrooms across the country today. In 2019. Only, in many classrooms, they’re being called something different: “Sexual Risk Avoidance (SRA).”

Abstinence-only (“SRA”) programs are ineffective and harmful–no matter what you call them.

For the past few years, abstinence-only proponents have been attempting a rebrand for their approach. But, besides the new public-health-sounding name, nothing else about these programs has changed. They still rely on shame and fear-based tactics, present an abundance of misinformation, and are completely ideologically-driven in achieving their one, specific goal: stop people from having sex* until they are married.*

(*It’s important to note that the abstinence-only perspective exclusively views the “sex” as penis-in-vagina and the “married” as heterosexual.)

But here’s the thing: These programs do not result in young people delaying sexual initiation. And beyond their well-documented ineffectiveness, these programs have also been shown to actively harm young people. Abstinence-only (“SRA”) programs:

But proponents of these programs are working really hard to trick you into thinking otherwise.

Abstinence-only (“SRA”) programs have faced a lot of opposition. Decades of research denounce them. Leading medical and professional organizations do not support them. And the general public prefers a more comprehensive approach to sex education, too.

The small but vocal group of “SRA” advocates do their best to spin these unpopular, ineffective programs as beneficial for young people. They even go so far as to co-opt language commonly used to describe comprehensive approaches to sex ed and may talk about their programs with words like, “holistic,” “empowering,” or “inclusive.”

However, by definition, these programs are the very same abstinence-only-until-marriage programs of the past. Take, for instance, the Title V Abstinence-Only-Until-Marriage state grant program. Title V provided roughly $50 million per year from 1998-2017 for “abstinence education” which aimed to promote abstaining from sex outside of marriage. In 2016, this program was renamed the “Title V Sexual Risk Avoidance Education” program. They changed the title, but not the abstinence-only-until-marriage purpose. Today, Title V continues to fund programs that are entirely centered on “voluntarily refraining from sexual activity.” A.k.A. abstinence.

This messaging shift came right out of the playbook of a leading pro-abstinence group called Ascend (formerly known as the National Abstinence Education Association). Coincidentally, soon after this shift, Valerie Huber, Ascend’s President & CEO, left the organization for a high-ranking position within the newly formed Trump administration’s Department of Health and Human Services (HHS). And even more coincidentally, Huber’s office soon began its attacks on the Teen Pregnancy Prevention Program. These HHS attacks were ultimately blocked in court for illegally trying to transform a bipartisan, evidence-based sexual health promotion program into yet another funding stream for abstinence-only (“SRA”) programs.

It’s also telling that some pro-abstinence groups blatantly advertise that abstinence-only programs and “Sexual Risk Avoidance (SRA)” programs are one in the same. Take for example, the American College of Pediatricians. And the Family Research Council. They are very clear in identifying that “SRA” is synonymous with abstinence-only. (And they also both happen to be designated hate groups.)

So, let’s tell Congress: Quit wasting billions of dollars on these programs. 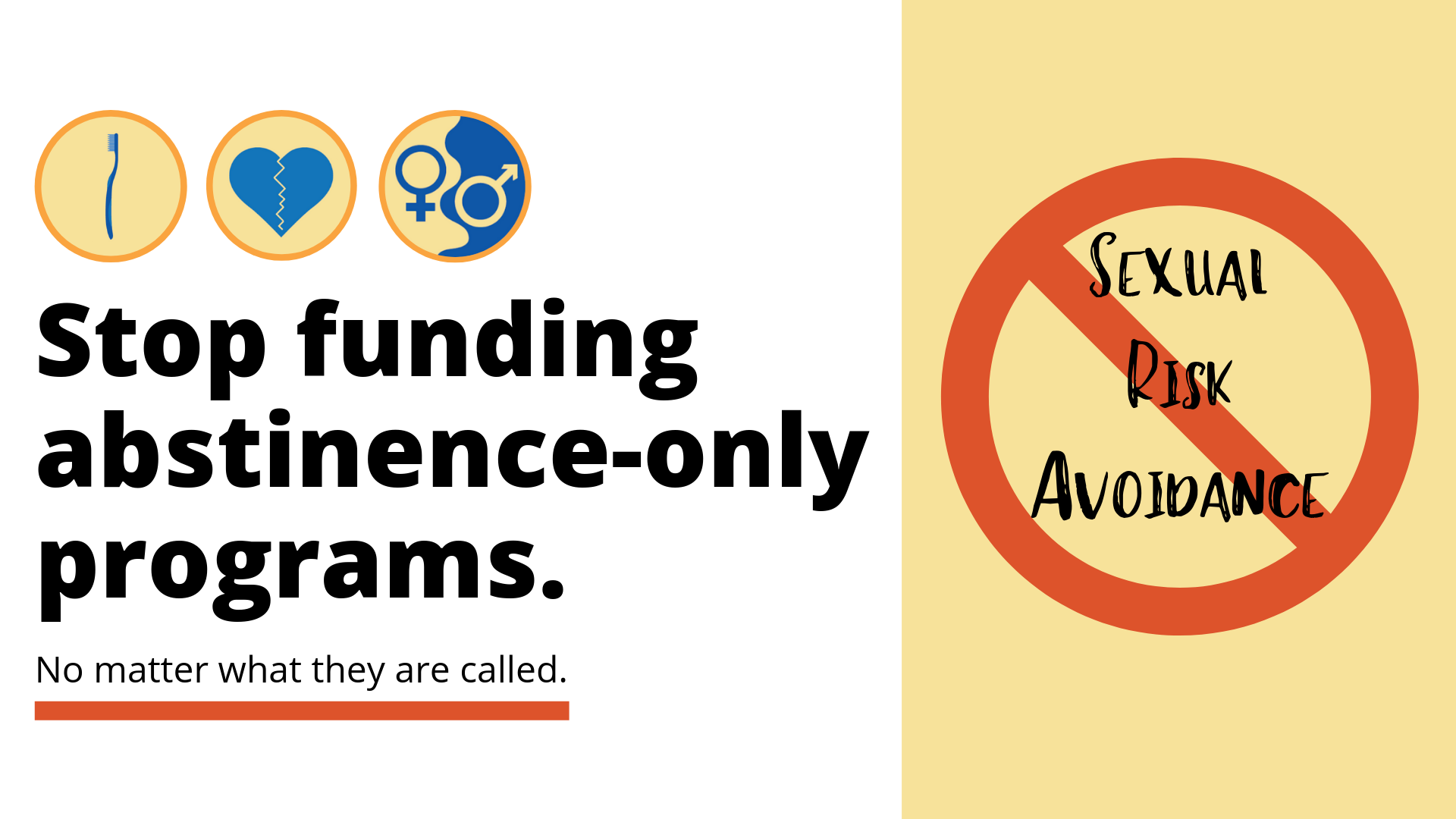 Regardless of the overwhelming evidence against these programs, ideologically-driven politicians continue to pour taxpayer dollars into supporting them. In fact, they have received billions of dollars in federal funding to date.

But we can work together to say, “Enough is enough.” Contact your members of Congress today and urge them to stop funding abstinence-only programs–no matter what they are called. We created an easy-to-use tool to help you do it.

No young person deserves to think of themselves as a used up piece of tape. Or a cup of spit. Or a dirty toothbrush. Instead, they deserve the honest, accurate, and complete information needed to ensure their own sexual and reproductive health and well-being.