We need to center young people in the fight against HIV. We can start with sex ed. 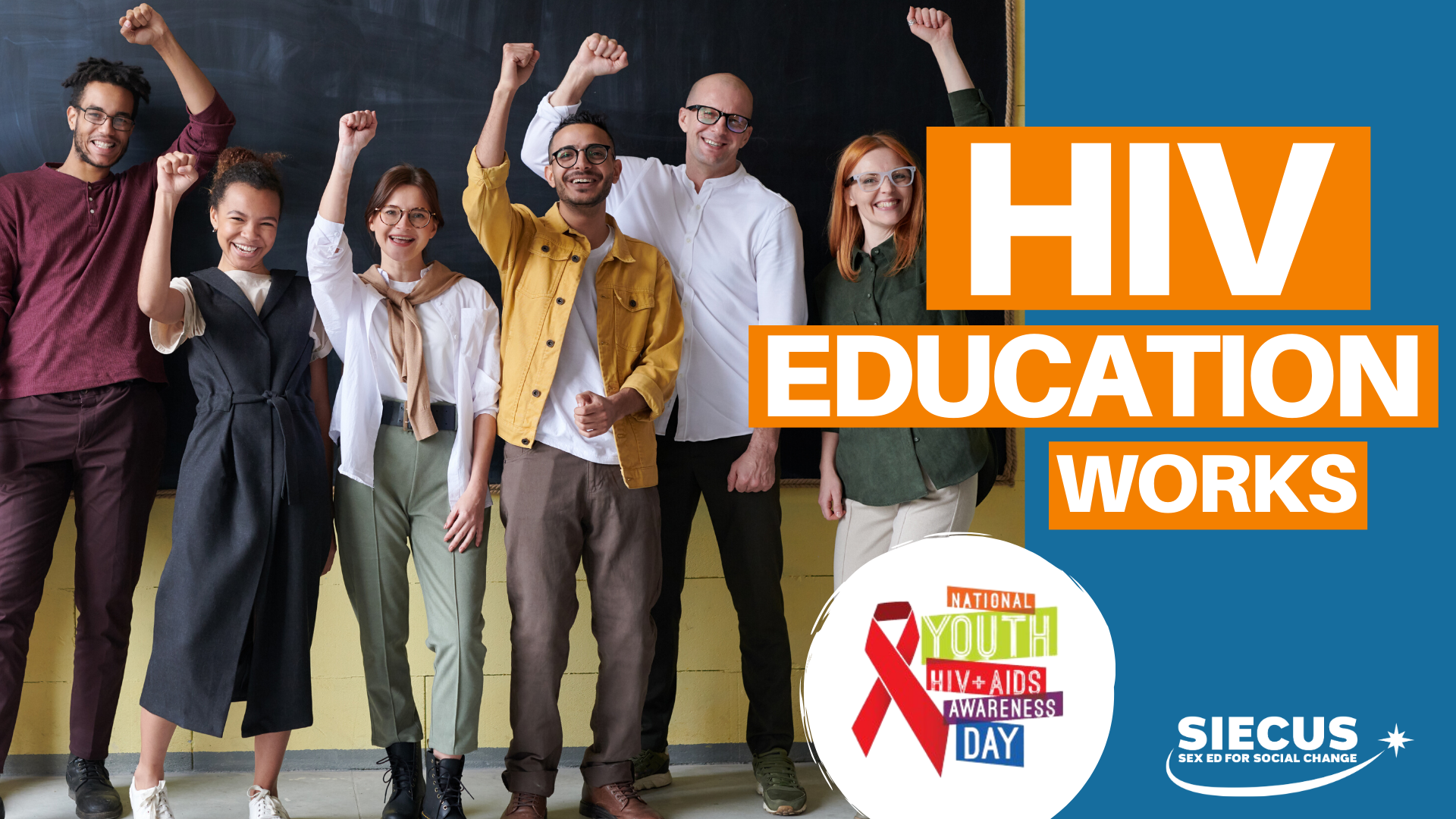 Today is National Youth HIV/AIDS Awareness Day (NYHAAD)! We are joining advocates across the country by calling for young people to be centered in efforts to end HIV in the United States. It’s estimated that 1 in 4 new HIV infections in the U.S. occur among young people ages 13-24. But, shockingly, it’s also estimated about half of these young people are totally unaware that they are HIV-positive.

Clearly, we are failing to provide young people with adequate information and education about HIV. So, this #NYHAAD, we are calling for HIV education to become a priority in our national efforts to end this epidemic. And we have a lot of work to do to accomplish that.

We know that HIV education works, so why don’t all young people get it?

Starting HIV education by 5th grade is one of the most effective prevention strategies to help lower the rate of new HIV cases in the U.S. People who learn about prevention and testing from a young age are more likely to both use protection during sex and get tested for HIV.

It’s important to remember that sex education ranges state-by-state and, at times, district by district. Only 29 states and the District of Columbia require sex education to be taught in schools. For nearly half of the country, it is up to individual municipalities and school districts to determine whether or not youth get access to sex education. Additionally, there is no requirement in 15 states for HIV/STI instruction to be age-appropriate, medically accurate, culturally responsive, or evidence-based or-informed. This means that a massive portion of young people have no guarantee for receiving critical information on preventing the spread of HIV or managing their health while living with HIV.

Why is sex ed so inconsistent across the US? One of the main reasons is the fact that there are no nationally mandated standards for sex education. However, there are some existing federal programs and pieces of legislation that could help to change that. The CDC’s Division of Adolescent and School Health (DASH) helps fund HIV/STI education programs across the states. But DASH’s support can only go as far as its funding takes it. DASH has a volatile budget history. From 2012 to 2013, funding fell by approximately $10 million and then leveled out through 2018. Additionally, their limited focus, due to lack of funding, only allows them to help a small number of local education agencies (LEAs). DASH is just one example of the programs that have the potential to do good work but are stifled by a lack of financial commitment from the government.

Comprehensive sex education is based in medical science and it’s free of shame and stigma. When provided, it enables young people to make the most fully informed decisions for themselves. So it’s crucial that young people receive this instruction not only to curb HIV, but also, to ensure their lifelong sexual health and well-being overall.

In his 2019 State of the Union address, President Trump pledged to end the HIV epidemic in the United States within the decade. Although the ‘Ending the Epidemic’ campaign dedicates federal funding to reducing the spread of HIV, there are currently no plans from any of the involved federal offices to expand educational programs on HIV.

The major strategies of the plan are to invest in “geographic hotspots,” track the spread of HIV by using data, and establishing local offices to implement community programs. The plan also elaborates on how to prevent the spread of HIV through Pre-exposure prophylaxis (PrEP) and syringe services programs (SSPs). But sex education, and any semblance of a youth focus, are completely absent. In fact, the plan limits young people’s access to services, expands harmful and ineffective abstinence-only programs, and provides religious organizations the ability to deny LGBTQ young people access to care.

What we need moving forward.

Strategies to address HIV in the U.S. must focus on providing young people with adequate information and education about the epidemic. Young people need to understand, earlier on, what HIV is, how to prevent it, and how to see past harmful shame, stigma, and stereotypes associated with having HIV.

Additionally, any successful efforts need to focus on Black and Latino youth, LGBTQ+ youth, and young people living at intersections of these identities. These groups are disparately impacted by HIV. And beyond the statistics, this tells us that our current systems are failing to provide Black, Latino, and LGBTQ+ youth with the information and services they need to be HIV-free.

The best way to make sure these young people are being heard is to put them at the front of our efforts. Programs like Advocates for Youth’s Engaging Communities around HIV Organizing (ECHO) help organize and train young people living with HIV to serve as community leaders. Similarly, we should also be focusing on ways to help public health leaders and health care providers shift their efforts to better target young people. For example, SIECUS’ PrEP Education For Youth-Serving Primary Care Providers toolkit equips doctors with the ability to educate, counsel, and where appropriate, prescribe PrEP for young people.

So, this National Youth HIV/AIDS Awareness Day, let’s key in on the need to educate and empower young people to lead efforts to end HIV in this country. No movement for young people can succeed without active participation and leadership by the young people themselves.