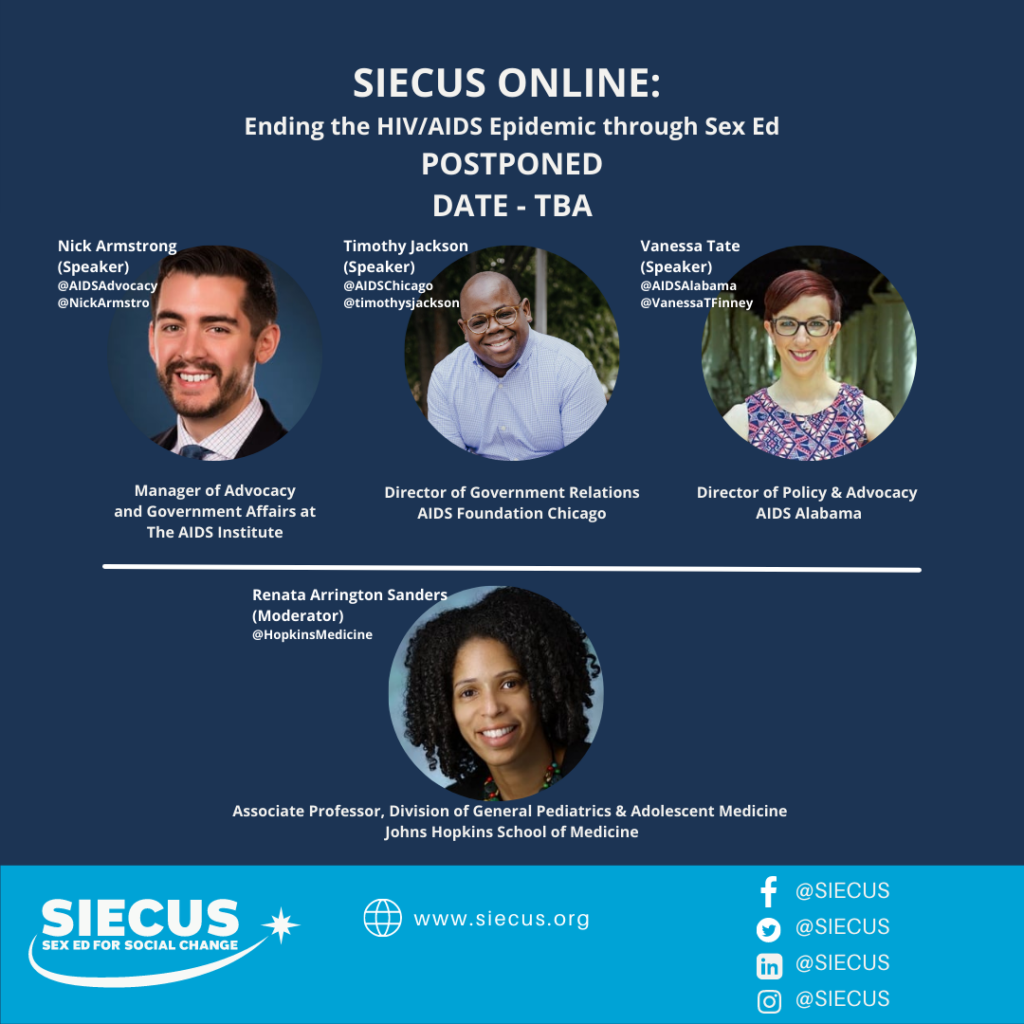 We are thrilled to be joined by Vanessa Tate, Director of Policy & Advocacy at AIDS Alabama, Timothy Jackson, Director of Government Relations at AIDS Foundation Chicago, and Nick Armstrong, Manager of Advocacy and Government Affairs at The AIDS Institute.

Renata Arrington-Sanders, Associate Professor of Pediatrics at the Johns Hopkins University School of Medicine, will moderate this conversation.

The webinar has been postponed, the date is TBA. Thank you for understanding.
If you have any questions, please contact gdoyle@siecus.org

Read the full bios of the SIECUS Online: Ending the HIV/AIDS Epidemic through Sex Ed Panel below.

Nick Armstrong (Speaker)
Nick Armstrong is Manager of Advocacy and Government Affairs at The AIDS Institute focusing on domestic HIV policy in the United States. Nick specifically works to advocate for adequate funding for domestic HIV/AIDS programs within the federal government, such as the Ryan White HIV/AIDS Program, the Centers for Disease Control, and the National Institutes of Health.

Armstrong works to advocate for people living with or at risk of HIV/AIDS before Congress and Executive agencies, and assists in implementing a broad range of domestic HIV/AIDS policy objectives. He is the Co-Chair of the AIDS Budget and Appropriations Coalition and the HIV Prevention Action Coalition, both of which are workgroups of the Federal AIDS Policy Partnership. Before working with The AIDS Institute, Armstrong was the Senior Government Relations Specialist for Arent Fox, LLP, where he coordinated federal, state and local government relations work for a diverse range of clients. Nick graduate magna cum laude from American University with a B.A. in Political Science and Certificate in Advanced Leadership Studies.

Additionally, Jackson was able to advance legislation that fully repeals the statute that criminalizes people living with HIV, making Illinois only the 2nd state in the nation to do so. Prior to joining the Policy & Advocacy team at AFC, Jackson served as a Congressional legislative and constituent services staffer for nine years. During this time, he also served as Board President for Thrive Alabama—an AIDS Service Organization and Federally Qualified Health Center providing medical care and support services to people living with and vulnerable to HIV across north Alabama.

As a Black gay man living with HIV for twelve years, Jackson’s career is centered on advocating on behalf of people living with HIV, amplifying the voices of those most impacted, and addressing the effect HIV has on the communities where his identities intersect.

Vanessa Tate (Speaker)
Vanessa Tate Finney is the Director of Policy and Advocacy at AIDS Alabama. She grew up in Tampa, Florida and moved to Alabama in 2018. Tate earned her degrees at the University of South Florida in Tampa, including a Master’s degree in Public Health. Prior to policy and advocacy becoming Tate’s life work, she was a human subjects researcher with expertise in child and adolescent behavioral health, mental health and substance use, the criminal justice system, and culturally-responsive end-of-life care.

Within Tate’s first year as Policy and Advocacy director at AIDS Alabama, she and her colleagues successfully advocated for the passage of a comprehensive sex ed bill and also prevented the anti-trans affirming medical care bill from coming up for a final vote. Tate has also played an instrumental role in the statewide expansion of Teen Advocates for Risk Prevention (TARP), a sex positive sed ex group for teenagers.

AIDS Alabama was also awarded the largest CMS (Centers for Medicare and Medicaid) grant in the agency’s history to assist with the Affordable Care Act Health Insurance Marketplace enrollment, which was the entire amount allocated to the state of Alabama overall. Tate has previously been invited to speak in front of local, state, and national groups, including the state health department, the state Ending the HIV Epidemic Committee, and SIECUS, among numerous others.

She currently resides in Birmingham, Alabama, with her husband, son, six cats, and a dog.

Dr. Renata Arrington-Sanders (Moderator)
Dr. Sanders is an Associate Professor of adolescent medicine and pediatrics at the Johns Hopkins University School of Medicine. Her areas of clinical expertise include adolescent sexually transmitted infection and HIV, adolescent transition to adult care, caring for sexual and gender minority youth, and school-based health center needs. She has a joint appointment in the Division of Infectious Diseases at the Johns Hopkins School of Medicine and Johns Hopkins Bloomberg School of Public Health’s Departments of Epidemiology and Health, Behavior and Society. She serves as the Medical Director of the Pediatric and Adolescent HIV/AIDS Program and the Director of the PrEP Program (prepisforyouth.org) located in the Harriet Lane Clinic at Johns Hopkins Children’s Center, and the co-Director of the Adolescent and Young Adult Scientific Working Group, Johns Hopkins Center for AIDS Research. National Institutes of Health, National Institute on Drug Abuse (NIDA, 1R01DA043089-01) and the Centers for Disease Control and Prevention, Baltimore City Health Department fund my work to identify HIV positive and high-risk HIV negative YBMSM, transgender and gender non-binary adolescents and link them to care, including primary, HIV and pre-exposure prophylaxis care services. She has served as a consultant to the Centers for Disease Control and Prevention (CDC), as representative for Maryland Chapter of American Academy of Pediatrics to the Maryland General Assembly to make recommendations regarding HIV testing laws in Maryland, and has worked locally with the Baltimore City Health Department to improve HIV testing strategies in youth aged 15 to 24.

Dr. Sanders joined the Governing Council of International AIDS Society (IAS) in 2020. She has served on the IAS Scholarship Program (2005-current), IAS Stigma Advisory Board, Youth Ambassador Programme at IAS 2021, and Collaborative Initiative for Paediatric HIV Education and Research (CIPHER) Research Grant Working Group (RGWG). She has also assisted with planning multiple workshops and programs related to the IAS. Additionally, she has has been an active member of the Society for Adolescent Health and Medicine (SAHM) Abstract Review Committee (2009-2013), the Regional President of the Chesapeake (2014-2016), LGBTQI Special Interest Group Leader (2014-2019), Nominations Committee of SAHM (2020-2021), Governance Review Subcommittee of SAHM (2019-current), Member-At-Large Representative, Board of Directors, SAHM (2016-2019). She has served as a member of the Principal Investigator group of the Adolescent Trials Network for HIV/AIDS Interventions (ATN) and co-Principal Investigator at the Johns Hopkins Site from 2011-2016 where she led community-based protocols including Connect2Protect and the SMILE Linkage to Care (LTC) Program for HIV-infected youth. She has also served as part of the Abstract Review Committee of The International Society for Sexually Transmitted Disease Research (ISSTDR). From 2014-2019, Dr. Sanders served on the Adolescent Medicine Subboard of the American Board of Pediatrics, and currently serves on the Research Advisory Committee of the American Board of Pediatrics, North American Thrombosis Forum (NATF), Venous Thrombosis Embolus Preventing & Managing Thrombosis in the Transgender Community National Committee, and on the Board of Directors of SIECUS: Sex Ed for Social Change.

Dr. Sanders leadership achievements have been recognized in multiple awards and roles in committees nationally and across the institution. In 2007, she was selected out of 300 applicants to attend the National Institute of Child Health & Human Development (NICHD) Summer Institute in Applied Research on Child and Adolescent Development. She has been selected to participate in three leadership development programs – the Association of American Medical Colleges (AAMC) Early Career Women Faculty Professional Development Seminar, the 2015 Johns Hopkins School of Medicine Leadership Program for Women Faculty and the 2021 Johns Hopkins Leadership Development Program. In 2017, she was one of 11 faculty awarded the Diversity Leadership Council’s (DLC) Diversity Recognition Award for the work with sexual and gender minority youth. In 2019, she was 1 of 23 researchers asked to present my work on Capitol Hill in the Rayburn House Office Building in Washington, DC where 602 registrants attended to learn about seminal research and programs across Johns Hopkins University.