Have you heard of these October awareness days? 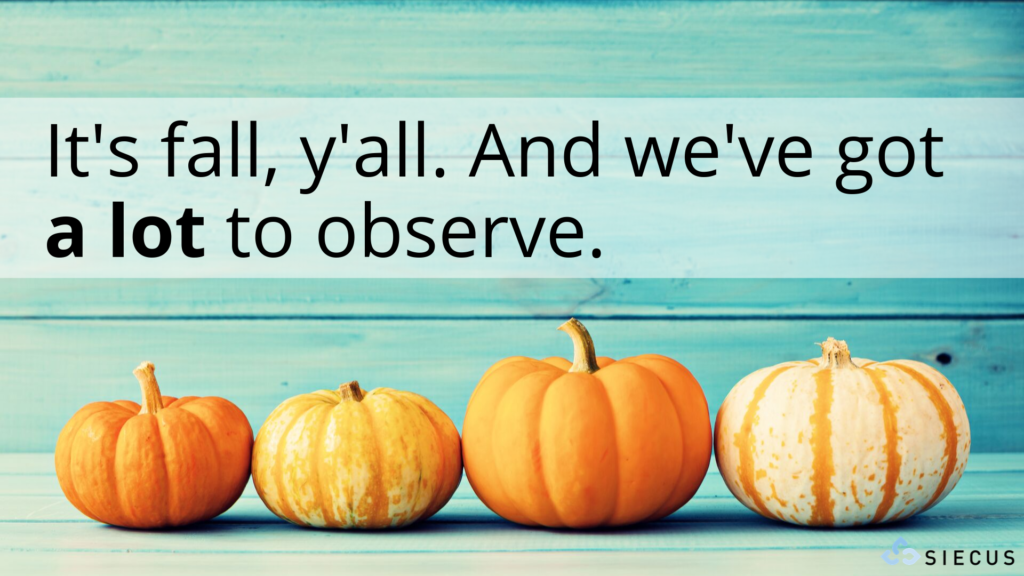 October is officially the spookiest month of the year here in the United States. We’ve got pumpkins, haunted houses, and Halloween decorations already popping up. You name it — the fall is officially upon us.

But beyond that, did you know that October is also filled to the brim with awareness days, weeks, and activities related to sexual and reproductive health, rights, and justice? To help keep folks up to speed, we created a quick list of what to expect this October:

First, the months! October is…

At SIECUS, we believe sex education plays a critical role in addressing domestic violence–as well as sexual violence and sexual harassment. From teaching young people about consent, bodily autonomy, healthy relationships, and more, sex education has the power to shape the way our society understands and approaches these ever-present issues.

Hint: follow @NCADV and check out their toolkit. Stay tuned for even more upcoming digital action from SIECUS and our partners.

Let’s Talk Month, coordinated by Advocates for Youth, is a campaign to encourage open and honest communication about sexual health and sexuality. Advocates for Youth has an abundance of resources in their Let’s Talk Month Planning Guidebook that cover funding your event, press packets, and activities by and for youth! We know parents want the best for their kids and research shows that young people want their parents to talk to them about sex.

While we’ve been enthusiastically celebrating queer history for decades, Equality Forum has been coordinating the October celebration since 2006. Not to be mistaken for Pride month in June, LGBTQ History Month is an international celebration and recognition of the queer community’s rich history, role models, and contributions to the world. Positive representation of queer folks – from sex education to history books to pop culture – matters. LGBTQ History Month is a great time for ensuring that young people see themselves reflected in public figures who are not only successful, but also, have changed our world for the better. So grab your coziest blanket and your pumpkin-iest spiced latte and check out Equality Forum’s list of icons to learn up on some must-know super queeroes.

Health, wellness, culture, and history are all intrinsically linked –  we can’t talk about sexual and reproductive freedom without cultural awareness. So, we’re excited to celebrate our Latinx friends and loved ones this October! Hispanic Heritage Month traces back to 1968 and kicks off on September 15, the anniversary of the independence of five Latin American countries: Costa Rica, El Salvador, Guatemala, Honduras and Nicaragua. Mexico, Chile and Belize also celebrate their independence days during this period. There are events all across the country for National Hispanic Heritage Month, and we encourage you to celebrate with your local community!

Individuals, families and organizations around the world hold space for those who have suffered a pregnancy loss or death of their infant child. October 15th also serves as World Pregnancy and Infant Loss Remembrance Day. This is a time for awareness and rallying support around the estimated one in four individuals who experience pregnancy or infant loss.

And next, the weeks…

A.K.A. Ace Week! We are so excited to celebrate all of the people under the asexual umbrella. This includes those who identify as

And, finally, the days…

A day of celebration for people coming out as their true selves is a day that we are HERE for! Our stories of coming out are powerful and brave – they are not always beautiful, but they are always impactful. Just as importantly, we also take this day to honor those who are unable to come out. Check out The Trevor Project’s Coming Out as You! resource and the Human Rights Campaign’s Coming Out Center.

In case you missed it: people live full, wonderful, sexual lives after an STI diagnosis. Herpes Awareness Day is about smashing stigma and celebrating people who are thriving and also just so happen to live with a STI.

Indigenous Peoples’ Day is upon us! The city of Berkeley, California first adopted “Indigenous Peoples’ Day”  in lieu of Columbus Day in 1992. Now four states (Alaska, Minnesota, Vermont, and South Dakota) re-conceive the holiday from the historical conquest of the Americas by Europeans and instead call attention to the history, treatment, and contributions of North American indigenous communities. Colonization is a reproductive justice issue because it removes the ability of indigenous people to maintain bodily autonomy and choose if, when, and under what circumstances they wish to parent. Read more about that in a blog post from The Brazen Project.

Coordinated by the Latino Commission, National Latinx AIDS Awareness Day (NLAAD) promotes awareness of the impact of HIV/AIDS on the Hispanic/Latino population in the United States. NLAAD supports increased HIV testing and provides information on access to care for Hispanic/Latino communities across the nation.

“What are your pronouns?”

Was that hard? No.

SIECUS is proud to be one of the original sponsors of the first International Pronouns Day (IPD)! IPD is all about normalizing respecting, sharing, and educating about personal pronouns. Use these resources to celebrate!

The term “intersex” recognizes the reality of existing “between” traditional sex characteristics. Being intersex is more common than most people think: nearly two percent of the population is intersex. Marking the first public demonstration by intersex people in North America, on October 26, 1996, Intersex Awareness Day is an international day of grassroots action to end shame, secrecy, and unwanted genital cosmetic surgeries on intersex children. Visit the Intersex Day Project to learn about the human rights actions promoted now and historically.

So join us during this ~spookiest~ month of the year! Carve a pumpkin, drink some cider, and celebrate, reflect, learn, educate, and be aware this October.

P.S. Is there an awareness day, week, or activity that you observe during October that we missed? If so, let us know! Email us at info@siecus.org.