What do we want? Inclusive sex ed. When do we want it? Yesterday.

As the National Coalition for LGBT Health explains, “This theme acknowledges the ongoing rhetoric surrounding LGBT health issues, from health insurance and data collection to health inequities and access to culturally competent care. It encourages a rejection of this rhetoric for a presentation of facts that reflect the realities of LGBT health today.”

And this theme couldn’t speak any louder to our current political climate in the U.S.

The Trump administration has unleashed a wave of dangerous rhetoric aimed directly at trans, intersex, and gender nonconforming people.

Since last year’s observance of LGBT Health Awareness Week, the Trump administration has taken a number of actions to discriminate against transgender, intersex, and gender nonconforming people, including but not limited to: continued efforts to ban transgender troops from serving in the military; multiple proposals to grant employers a license to discriminate under the guise of ‘religious’ exemptions; and attempts to literally erase these communities from existence.

Not surprisingly, rhetorical and political actions like these are taking a devastating toll on young people across the country. The Centers for Disease Control and Prevention’s (CDC) 2017 Youth Risk Behavior Study (YRBS) uncovered a number of health disparities faced by transgender youth. These included disparate rates of young trans folks attempting suicide, being bullied, and feeling unsafe at school.

The top-line data from the report shows that 35 percent of the trans students identified in this study have attempted suicide in the past year. Thirty-five percent report being bullied and 27 percent say that they feel unsafe going to school. The report also shows that compared to cisgender students, trans young people are also more likely to experience sexual violence and substance abuse. To address these disparities, the CDC report recommends creating safe and supportive school environments to support trans youth.

How can we do that? The answer is clear: young people need inclusive sex ed that, specifically, affirms trans, intersex, and gender nonconforming folks.

When students receive sex education from an early age, they learn to understand and respect all gender identities and sexualities. When done right, sex education has to power to promote health and safety for all students—no matter how they identify.

For more insight into why we need more inclusive sex education in schools, we spoke with Jasper Meagher. Jasper is a twenty-year-old, nonbinary trans man currently attending Florida State University (FSU). In addition to studying biology, Jasper also serves on the executive board for Gender Odyssey–a social group for the transgender, nonbinary, and gender non conforming community at FSU. 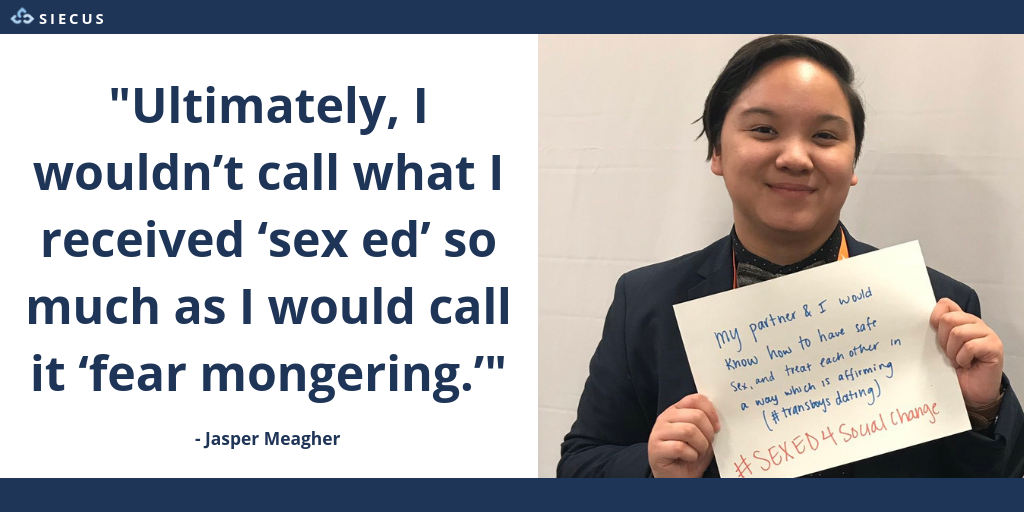 Like many LGBTQ youth, Jasper’s sex education experience was, to say the least, disappointing.

“In seventh grade, I received a month-long sex education unit as a part of science class. Most of the course focused on the structure and labeling of genitals. Hardly any of it was actually about sex. While we technically spent two days talking about sex, we didn’t really learn about it. The unit focused on two things: pregnancy and sexually transmitted infections. It was an abstinence-only-until-marriage approach which, obviously, doesn’t work for everyone.

I was mostly scared of sex because no one had explained to me exactly how STIs were transmitted or how to protect myself against them. I also thought that having sex meant you automatically had a baby and that there was no other option. It wasn’t until much later that I learned about how sex can actually work.

Additionally, they didn’t touch on anything about LGBTQ+ people being sexually active. While it wasn’t until years later that I understood I was transgender, at that time in my life, I knew I was queer. But I had only ever learned that sex could happen between a person with a penis and a person with a vagina. I didn’t know about oral sex. I didn’t know that sex didn’t have to involve penetration. Was what I had even able to be considered ‘sex education?’

Ultimately, I wouldn’t call what I received ‘sex ed’ so much as I would call it ‘fear mongering.’” – Jasper Meagher

But Jasper notes that a few small changes could have made a giant impact on the effectiveness of his sex education.

“It would be very simple and incredibly helpful for sex educators to remove the attachment of gender to genitals. It’s important (and easy) to stress that a person’s genitals do not indicate their gender.

And sex education should really aim to be inclusive of trans and intersex communities in addition to the overall LGBTQ+ community. Sharing basic information like the fact that gender is a spectrum, not something limited to just two categories, is vital. This type of education shouldn’t be restricted to what works for the cisgender heterosexual population. Trans, intersex, and gender nonconforming young people need to learn that they can have a healthy and safe sex life when they are ready for it, too.” – Jasper Meagher

When we provide young people with inclusive sex education, we have the ability to change their lives for the better.

“Wow, if I had inclusive sex education, life would have been incredibly different. If someone were there to teach the facts about the transgender community–not the myths or the stigma–earlier on, I think it would have really made my coming out in high school a much more positive experience. It would have been helpful not only for me, but also for my school community, to have had a basic discussion about the LGBTQ+ community. Learning things like, ‘gender is a spectrum,’ or ‘sexual orientation is not a choice,’ or even just knowing that there are alternative family structures could have made a world of difference. This basic information can help spread basic knowledge. And that starts to tackle stigma and break down the walls around the LGBTQ+ community.” – Jasper Meagher

We have what we need to provide inclusive sex education in classrooms all across the country. We just need to prioritize it. Here are a few resources to get started:

Principles for Gender-Inclusive Puberty and Health Education
Earlier this month, SIECUS worked with Gender Spectrum and a number of other leading organizations to release the landmark publication, “Principles for Gender-Inclusive Puberty and Health Education.” This resource affirms and recognizes all students so they can see themselves reflected in the sex education they receive. It serves as a guide for educators to teach young people the skills and information needed to ensure their health and well-being–no matter how they identify.

Advancing inclusive sex education is a critical component of improving LGBTQ health in the U.S.

Focusing on things like health insurance coverage and access to competent care for trans, intersex, and gender nonconforming adults is absolutely vital. But, in many of our conversations around LGBTQ health, we overlook LGBTQ youth. And, in doing so, we miss a necessary opportunity to address the root cause of many of our most pressing LGBTQ health issues today: The learned shame and stigma that negatively impact far too many members of the LGBTQ community. But that doesn’t have to be the case.

We can all work to advance inclusive sex education in our own communities. In the words of our friends at Gender Spectrum, it is “life-affirming for all students and life-saving for some.”