As we observe ‘Domestic Violence Awareness Month,’ we need to include LGBTQ folks – an interview with Danielle Metzger 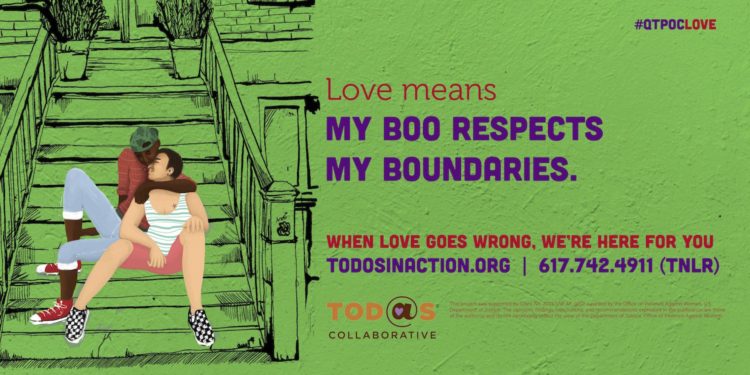 Since the first observance of Domestic Violence Awareness Month (DVAM) in 1987, significant progress has been made in addressing the epidemic of domestic violence in the United States. However, even as folks across the country take steps to raise awareness around the issue this month, one group continues to be left out: the LGBTQ community.

When most folks think of “domestic violence,” their first image is often of a cisgender male physically abusing his cisgender female partner. However, intimate partner violence or IPV (the term used for domestic violence that occurs between two romantic partners) affects people of all sexualities and gender identities. In fact, research tells us that LGBTQ folks are often disproportionately affected by IPV.

To get a better understanding of this issue, we spoke with Danielle Metzger, MSW, LCSW, Counselor and Advocate at Fenway Health’s Violence Recovery Program.

See our interview with Danielle below:

Can you briefly talk about the current state of domestic violence in the United States?

Domestic violence reflects a pattern of power and control within interpersonal relationships. When we talk about statistics, the things that studies often quantify are instances of physical violence and stalking. The NCADV says that 1 in 4 women and 1 in 9 men will experience severe intimate partner violence (IPV)–including physical violence, forced sexual violence, and stalking over their lifetime.

This leads to some negative outcomes like post-traumatic stress disorder, contracting sexually transmitted infections, and higher rates of depression and suicide.

But we know domestic violence goes beyond just physical violence–it’s emotional abuse like putting your partner down. It’s isolating someone, it’s gaslighting–or invalidating a person’s perception of reality to the point that they question their judgement. It’s also economic abuse, capitalizing on privilege, using children, and so much more. And it is very pervasive in this country.

And what does this epidemic look like specifically among the LGBTQ community?

Again, in terms of statistics, the Centers for Disease Control and Prevention (CDC) compiled data in 2010 that found, in general, LGBTQ folks experience rates of IPV that are equal to or higher than those of their heterosexual counterparts.

According to the CDC, 44% of lesbian women and 61% of bisexual women (compared to 35% of heterosexual women) experience rape, IPV, or stalking in their lifetime. Twenty-six percent of gay men and 37% of bisexual men (compared to 29% of heterosexual men) report these experiences, too. These numbers are all very high–the lowest translating to 1 in 4.

There is a range of studies that highlights these issues among transgender folks, too. An estimated 31-50% of trans folks experience IPV in their lifetime. We definitely need more studies and more data on all of this.

It’s also important to talk about the IPV tactics used among LGBTQ abusers. We see a lot of patterns of power and control–similar to what’s observed within the context of non-LGBTQ IPV.

However, there are also many added layers. We often see things like:

LGBTQ folks are more likely to face additional isolation and may already have lost access to communities if/when they came out. Then, if you add other identities (i.e. immigration status, race, religion, ability, etc.), leaving an abusive partner becomes significantly harder.

What are some common myths or misconceptions surrounding domestic violence among the LGBTQ community?

The biggest myth is “this doesn’t exist.” This is something I hear not only outside of my job, but also from my clients. It takes them so long to get help because they are told things like, “This isn’t a real thing.”

A lot of myths carry over from non-LGBTQ IPV, too. For example, the “man” or “masculine” person in the relationship (as if there has to be one, or can only be one) is typically pegged as the abuser. While it’s true that, statistically, men are more likely to perpetrate than women, it’s not the only possibility.

I once had a client tell me, “But I’m the butch one.” She had incredible difficulty accepting that, within her same-sex relationship, her partner, “the femme one,” was, in fact, abusing her.

When we talk about two men in a relationship, it often falls back to the “boys will be boys” mentality. This normalization of violence among men—the idea that this is just what guys do, is incredibly dangerous.

There is also a myth that there isn’t any help out there for LGTBQ folks dealing with this. But, I’m here to tell you: there is!

In addition to what we are currently seeing play out on the national level about survivors not being believed, for LGBTQ folks, it’s even more complicated to speak out about experiencing violence.

The LGBTQ community is a small community – most folks seems to be one or two degrees apart. What if you speak out against someone who is a leader in the community? Will anyone believe you? You might be risking isolation from the one community that you feel a part of.

There is also this feeling among many minority communities where people wonder, “We are already discriminated against. If we air our dirty laundry out on the street, what else will happen to us?”

Let’s talk about sex education. How could we better utilize sex education in schools to address issues like domestic violence among the LGBTQ community?

Sex education can be and should be so much more than just a biology lesson. There are some progressive schools that are putting LGTBQ 101 content into their lessons. That’s an excellent starting place, but sex ed needs to go beyond just a definition of what “transgender” means.

What happens in a healthy, adult bedroom is a microcosm for what happens outside of the bedroom, too.

Sex ed should teach kids to respect themselves and their partners. It should give them the tools needed to communicate effectively and recognize warning signs. Sex ed should teach what healthy and unhealthy relationships look like—and that physical violence is far from the only type of abuse that can be experienced.

If we properly utilized this golden opportunity we have with sex education in the classroom, we could absolutely help lessen the severity of—and hopefully, one day, end—the epidemic of domestic violence in this country.

What do you think is the most important thing that young LGBTQ students need to hear in the classroom?

When we write queer students out of the curriculum, we invalidate them. We tell them, “You’re not worth talking about.” And that is simply not true.

While the latest data tells us that the majority of people in this country support sex education that covers a variety of topics—including sexual orientation—there is a small but vocal group of folks who think teaching about LGBTQ topics at school is “inappropriate.” What would you say to them?

I would ask them to meet their neighbors. I think it is so easy to demonize the “other,” especially when that other is completely unknown. But queer folks are everywhere — whether they’re out or not.

To the people who oppose putting LGBTQ information in sex ed: queer folks are in your family, they are sitting next to you at church, buying bread from the same grocery store you visit every week. Get to know your neighbor—talk with them. Because if you do, and if you do it with an open mind, you’ll start to realize that queer folks are just like you.

There is no such thing as an “inappropriate” identity. People are just people.

What actions can we take, as individuals, to better address the epidemic of domestic violence among the LGBTQ community?

There is a silver lining in all of this: On the individual level, there are lots of things we can do to address this issue.

Beyond just educating yourself on what this epidemic really looks like, I would say, first and foremost, check your assumptions at the door.

Second, be a good listener. Reach out to people you are worried about. Let them know you are there to support them. If you are not in a place to help, let them know there are places they can get help.

What we know is that domestic violence thrives in isolation. It thrives when an abuser can say, “No, I don’t like your family. We can’t see them.”

Just by reaching out, you are already making a difference in reminding survivors that they are not alone.

Is there anything else that you want folks to know about domestic violence among the LGBTQ community, sex education, and beyond?

It starts at home. If you have kids in your life in any way, be a good role model. Lead by example.

Show those kids how good it feels to have relationships built on mutual respect. Remind those kids all the time that you love them for who they are—including their gender identity and sexual orientation.