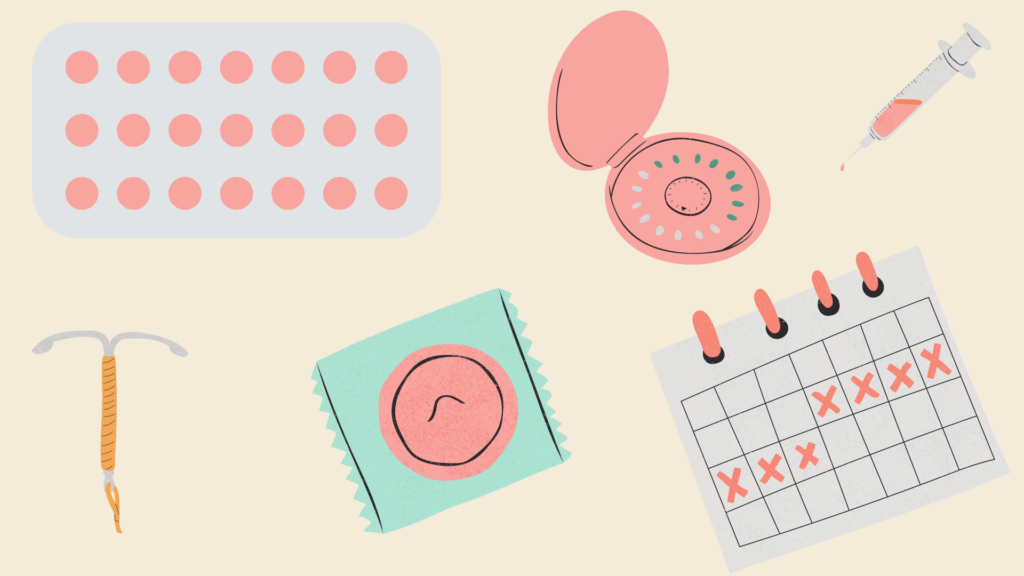 *Content Warning: descriptions of racialized and ableist reproductive violence and sexual assault are contained in this blog post*

When you hear the phrase, “contraceptive coercion,” what do you think of? Many folks might conjure stories they’ve heard about abusive practices such as poking holes in condoms, lying about birth control, or “stealthing” – which, while not illegal in most of the world, is a form of sexual assault.

One way to think about the relationship between contraceptive access and coercion is to consider them on opposite ends of a spectrum. On one side exists the attempt to control (in this context, limit) the reproduction of someone else – contraceptive coercion. On the other side there are very real structural barriers to gaining access to contraception – contraceptive access, or, more accurately, the lack of it. These issues are polar in nature, exist at the same time, and deeply affect one another.

I’d be remiss to not address my limited understanding of the racialized nature of reproductive coercion and violence as a white woman. I’m grateful for the work of Dorothy Roberts, Resmaa Menakem, and the folks at ReproJobs as well as the guidance of Jennifer Driver – all of which have contributed to my understanding of reproductive coercion and the ways white supremacy shows up in the reproductive/sexual health sector today.

To understand the impacts of contraceptive coercion today, we need to understand the United States’ history of reproductive injustice. What’s included here is by no means a comprehensive history. It’s a starting place. Killing the Black Body by Dorthy Roberts is an excellent resource to learn more.

James Marion Sims, who has been celebrated by some as a “father of modern gynecology,” developed his methods by experimenting on enslaved Black women* in Alabama in the 1840s. After 30 operations in four years on one woman—a 17-year-old enslaved woman named Anarcha—he began to practice on white women, using anesthesia.

The rise of eugenics in the early 20th century caused marriage laws and forced sterilizations to become embedded in the legal system – largely targeting people of color, people with disabilities, and people with low-incomes. The eugenics movement enabled Connecticut to pass a law making it illegal for people with epilepsy or who were “feeble-minded” to get married. From 1907 to 1979, around 20,000 sterilizations occurred in California state mental institutions. In fact, 33 states eventually allowed involuntary sterilization for whomever lawmakers deemed appropriate.

The first large-scale human trial of the birth control pill was in Puerto Rico in the 1950s. The women who volunteered to use the pill were not informed that they were taking part in a clinical trial, that the pill was experimental, or that there was a possibility of dangerous side effects. Many were not fluent in English, and it’s thought that the researchers believed that this would ease concerns that oral contraceptives “would be too ‘complicated’ for women in developing nations and American inner cities.” This also conveniently made it easier for the researchers to conduct the experiment without the subjects understanding the risk. Three women died during the trial.

Moving forward to the 60s and 70s, sterilization had become the most rapidly growing form of birth control in the United States. Again, the power of contraception was abused by health care professionals. Black people in the South were routinely sterilized without their informed consent and for no valid medical reason. Teaching hospitals performed unnecessary hysterectomies on low-income Black women as practice for their medical residents. This sort of abuse was so widespread in the South that these operations came to be known as “Mississippi appendectomies” after activist Fannie Lou Hamer spoke out about her experience. While having surgery in 1961 to remove a tumor, 44-year-old Hamer was also given a hysterectomy without consent by a white doctor. In North Carolina alone, 7,600 people were involuntarily sterilized between 1929 and 1974 – 40% were people of color. North Carolina did not repeal their law allowing involuntary sterilization until 2003.

Indigenous peoples’ reproductive freedom has been compromised by colonization, forced migration, and genocide at the hands of white colonizers. There’s no way to separate this context from the current state of reproductive health and contraceptive equity for Indigenous peoples. The United States government has a pattern of reproductive violence against Native communities. Reports show that women were coerced with false information (i.e. that sterilization was reversible) or threatened with the removal of their welfare benefits. In 1976, the U.S. government admitted to sterilizing 3,406 indigenous women without their permission.

Court-compelled contraception is still being addressed in the criminal injustice system. In 2013, The Center for Investigative Reporting found that the California Department of Corrections and Rehabilitation contracted doctors who sterilized nearly 150 female inmates from 2006 to 2010. At least 148 women received tubal ligations, despite that doing so was in violation of prison rules, and there are perhaps 100 more dating back to the late 1990s. In 2006, in regards to her tubal ligation, one woman at Valley State Prison said, “As soon as [the doctor] found out that I had five kids, he suggested that I look into getting it done. The closer I got to my due date, the more he talked about it. He made me feel like a bad mother if I didn’t do it.”

Black women still suffer a disproportionate burden of hospitalization for fibroids and hysterectomies compared to their white counterparts. Additionally, a 2010 report by the Urban Indian Health Institute showed that the Indigenous women they surveyed had significantly higher rates of sterilization and Depo-Provera (a hormonal birth control shot) use than that of non-Hispanic white women.

Overly aggressive LARC promotion is also an issue of concern, and there’s research to back this concern up. LARCs are “long-acting reversible contraceptive” devices like IUDs and arm implants. Patients have reported that LARCs are sometimes pushed upon them regardless of their individual reproductive health needs and priorities. While LARC methods need to be included as an option in contraceptive counseling and equally accessible for all people, over-promotion presents an issue to reproductive autonomy and informed consent.

Contraceptive coercion and reproductive violence have contributed to the lack of access to contraception. Health professionals are often too quick to assign the fault of health disparities to personal choices or lack of awareness, when the foundation to all health interventions is overlooked: trust. Historical and racialized trauma inflicted by health professionals have justifiably caused deep distrust of reproductive health care, and this needs to be addressed (but more on this later).

Unfortunately, that’s far from the end of contraceptive access issues. Under the ACA, health insurance is supposed to cover contraceptive methods and counseling. However…there are a lot of loopholes. In fact, cost still prevents one in five U.S. women from using their preferred contraception.

The Title X Family Planning Program, a program that is supposed to ensure reproductive health care for low-income families and uninsured people, was inflicted with a “gag rule,” in August 2019. This new rule bars clinics using Title X funding from performing abortions or making referrals for the procedure and the ultimatum has pushed nearly 900 clinics out of the program. Then, in July 2020, the Supreme Court ruled that employers can opt out of providing contraction coverage in their employee health plans if the employer has a “religious or moral objection.”

Young people are particularly vulnerable to barriers in contraception access. In fact, only around two dozen states explicitly allow all people under 18 to access birth control without first getting a parent’s consent and some doctors don’t think that IUDs are appropriate contraceptive choices for young people.

The short of it: sometimes, people are pressured into using contraception. Other times, people that want contraception can’t access it. There needs to be a balance, and the key to striking this balance is placing the appropriate value in patient autonomy and informed consent.

Contraception is not “one size fits all.” Ultimately, the priority should be to get people on the best contraception for them, not the “best” by provider’s standards and not what is considered acceptable by an employer’s religious or moral principles. And while it’s easy to become hyper-focused on making contraception accessible, and yes, contraceptive access needs to improve. But if we lose sight of the basic values of reproductive justice, we’ll actually cause more harm than good.

Yes, this relates to sex ed

So, what does this have to do with sex education?

People need to be knowledgeable about contraception way before they go into their first appointment to make a decision. It’s a big decision!

Last spring, for a class project, I spoke with several LARC users who felt that their provider “strongly” recommended LARC devices. Those who felt confident about their decision to use LARC were much more likely to have gone into the doctor’s appointment already knowledgeable about contractive options. Being equipped by sex education at school or online (shout out to Scarleteen, Planned Parenthood, and Bedsider) gave them the ability to make an informed and well thought-out decision.

Beyond understanding contraceptive methods, people need to know they have bodily autonomy that deserves to be respected and the skills to negotiate their desires and needs. In terms of access, people need information about where they can get contraception affordably, how to get to the doctor’s office, and how to use it properly. And, yes, all of these things can and should be included in sex ed.

While there is a lot of work to do to ensure access while still avoiding coercive practices, sex education is at the very root of the issue.

Repairing the damage of contraceptive coercion and its connection to disparate contraceptive access is a complex task. It’s important that health professionals understand and recognize the generational trauma and violence that has been committed by the medical and public health trades. That said, while educating yourself and others on historic reproductive violence is necessary, it is not enough.

Beyond understanding the context of historic reproductive violence, reproductive health/sexual health professionals need to address the racism and reproductive injustice happening within themselves, their communities, and their organizations. What might this look like? (BIPOC are telling you. Are you listening?) A few ideas include critically evaluating the authenticity of community engagement practices, hiring and fairly compensating people of color for their time and labor, addressing the white supremacy within yourself, addressing the white-supremacy in your immediate workplace, and passing the baton of leadership to people of color. (And if you thought none of those things applied to you, start there and think again.)