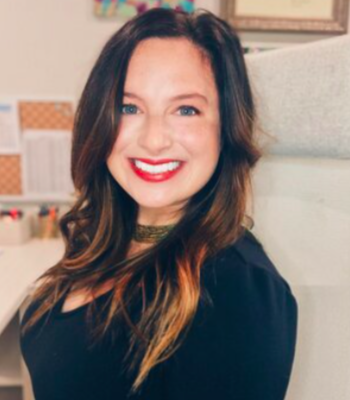 Ally Talcott is a Principal with Step Up Advocacy. Ally focuses on the federal appropriations issues, k-12 policy, and higher education legislation. Additionally, she works with Step Up Advocacy’s clients to organize and arrange key educational grassroots events such as lobby days, press events, and Hill briefings.

Prior to joining Emily in launching Step Up Advocacy, Ally was Vice President of Bernstein Strategy Group government relations firm from 2014-2020. During those six years, Ally went from a junior associate position rising in the ranks as she grew the firm’s book of business and held leadership positions in various organizations.
In 2016, Ally helped form the Title IV-A Coalition to secure a large increase in funding for the Student Support and Academic Enrichment (SSAE) grant program after the Every Student Succeeds Act (ESSA) consolidated many education programs into a flexible block grant. Under her leadership and guidance, she successfully lobbied Capitol Hill on behalf of a diverse group of education nonprofits that make up the Title IV-A Coalition and helped raise funding for the program from $400 million to $1.1 billion in just one year. She currently serves as their Executive Director and strongly advocates for continued investments for safe and healthy students, well-rounded education programs, and the effective use of technology.

Ally has been featured in several publications for her advocacy work including Forbes, Teen Vogue, GirlBoss, Brit + Co to name a few. In addition to her direct lobbying work and coalition building, Ally is an active member of Women in Government Relations (WGR), served on the Committee for Education Funding (CEF) board of directors from 2015-2018, and graduated from the Institute for Educational Leadership (IEL) Washington DC Education Policy Fellowship Program (EPFP) in 2017. While in law school, Ally Taught 4th and 5th grade students in low-income schools as part of the “Humane Education Program.” At her law school graduation, Ally received the Outstanding Pro Bono Service award for her dedication to community service. She received her Juris Doctorate from Pace University School of Law, her Bachelors degree from Florida State University, and is a member of the Virginia State Bar Association.