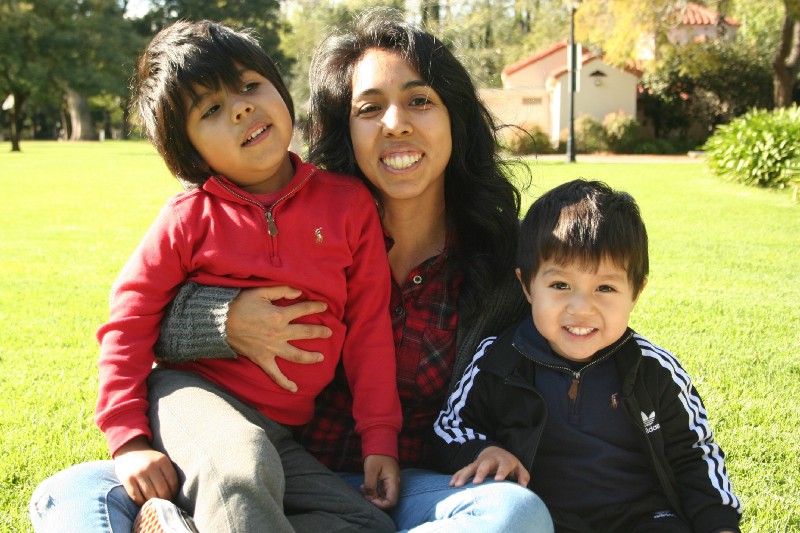 Educational campaigns that provide the information and resources needed to avoid unintended pregnancy are vital. In fact, young people have a right to learn all of the information they need to make informed decisions when it comes to sex — and that includes options related to pregnancy.

However, over the years, campaigns have also incorporated a slew of messages that, instead of advancing education, actively shame young parents. For example, previous campaigns have reinforced negative stereotypes about young mothers. They’ve featured slogans like, “You’re supposed to be changing the world…not changing diapers,” relying on shame and fear as motivations for avoiding pregnancy.

This May, we’re focusing on reframing conversations about unintended pregnancy. While it’s important to provide young people with all of the information they need, it should be shared in a way that avoids shaming and stigmatizing young parents.

To amplify our efforts in reshaping these discussions, we reached out to #NoTeenShame — a national movement created by and for young parents to remove the stigma associated with young parenthood.

Read our interview below with Amelia Lopez, Contributor at #NoTeenShame:

Can you tell us a bit about your experience when you first became a parent?

I was 19 when I found out I was pregnant. My boyfriend and I were both aware that I had missed my period for a few months.

I was going to go play soccer at a local neighborhood complex when, suddenly, I just stood there, worried that playing soccer might hurt something I was not entirely sure was inside of me.

But my birth control had been making my period irregular, so a few months before, we had gone to the doctor to see if I was pregnant. The test was negative.

Naturally, my boyfriend thought it was going to be negative again, but for peace of mind, he agreed to go with me to the local clinic. He stayed in the car under my request and I went inside to get tested. It was positive. I had a feeling it might be (we had not been practicing safe sex at all so I knew it was a big likelihood).

There’s nothing quite like hearing you’re pregnant. Back then, my beliefs were very black and white so there was no doubt I was keeping the baby. But even then, I dropped my bag twice walking out of the clinic. I told my boyfriend in the car. I sort of went numb.

I really didn’t know what to think. I knew in my heart I wasn’t quitting school. I had the Gates Millennium Scholarship that paid for me to go to the University of Southern California. I wasn’t going to throw that away.

But I also knew how the news was going to make people react. Less than two years before that I had been valedictorian of my high school. And now the valedictorian was pregnant? People started talking about me like I had passed away. “She had such a bright future…. So much potential.”

My parents somewhat figured it out without me telling them. They were shocked and annoyed I didn’t practice safe sex. My brothers were also disappointed and skeptical about how the father of my child would help me.

When it comes to being a parent, no one is really prepared for it, but outsiders love to give opinions about how to handle things without providing any real help. Juggling school and a child and finances were all things I had never done before, but trying to do them while having every decision I made questioned was especially hard. It created a lot of self-doubt.

It caused me to go into a massive depression that I brushed off as just nervousness from everything I had experienced. I also told myself that I deserved to feel like this. That this was the result of my decision not to practice safe sex. It was a tough time.

Are there any resources or specific pieces of information you wish you had before you became a parent?

Personally, it’s a bit of both resources not being highlighted for young parents the way they are now and the fact that I could have looked more effectively. The biggest issue for me was childcare. The father of my child and I managed to make things work by arranging our schedules so I could go to school during the day and he could work nightshifts.

But the challenge for me, being a journalism major, was the outside work that I had to do to complete my assignments (interviews, filming events, etc.). I do sometimes think about what it would have been like if someone had given me more information about how to handle my childcare more effectively. I did find out more about it later on as my first child got older and I was pregnant with my second. But at that point, I had an easier schedule.

There were services that really helped me out when I found a steady job and all that. But I do think about how the flexibility would have been more useful when I was a young student with a busy schedule.

Let’s talk about ‘Teen Pregnancy Prevention Month.’ What is helpful or good about this awareness month? What needs to change?

I think it all depends on how the message is delivered. Is it good to have an open discussion about safe sex? Yes.

Is it good to let young people know about how they can protect themselves from diseases and unplanned pregnancies? Still yes.

But at the expense of young parents and shaming them so that other young people are scared to feel that same shame? Absolutely not.

Fear should not be the primary motivation to get young people not to become pregnant. It is about educating them with accurate information.

The message that seems to be floating around when it comes to teen pregnancy is “if you get pregnant, your life is over.” It’s a struggle sometimes and it is hard but your life isn’t over; far from it.

But it all falls back on the way the messaging tries to instill that fear. That needs to change drastically. There are so many stories of teen pregnancies that are raw and honest about the realities of young parenthood and that’s the way the month should be shaped — both facing hardships and success stories — because those aren’t just outliers.

Many young parents go on to have great careers and lives while raising their children.

Can you talk about a time you felt ‘shamed’ for being a young parent?

The biggest example of young parenthood shaming for me has been the second-guessing of my decisions. The lack of confidence others had in the decisions I made very much shaped the way I handled parenthood with my first son and his infancy.

In retrospect, I can see exactly how it molded everything from how I fed him, to what readiness centers I took him to, to who was allowed to babysit him, and even how I was supposed to dress because I was now a mother. It took a lot of time for me to learn to not feel shame in who I was. It took work to see myself as the person I am — who just also happens to be a young mother.

What advice would you give to folks in the sexual and reproductive health, rights, and justice fields to avoid shaming young parents as they work to help folks prevent unintended pregnancy?

It’s all about the framing of the message and about the experience of actually being a young parent. The best way to talk about a situation is to have people who have been in that situation help control the narrative.

Hire more young parents or look for young parents who are willing to speak on the matter. That way, it’s not an outsider’s perspective giving the advice to young people. It’ll stick with them more and help them ask more questions so they understand what can happen.

Why is it important to specifically mention young parents (and people) of color in our efforts to advance sexual and reproductive health, rights, and justice?

At times, the sexual and reproductive health and justice fields seem to leave young parents of color out of conversations. Some of it has to do with our own personal beliefs that we have to deal with the struggles we are facing completely on our own but also because society has framed it to be that way.

When young people of color share their stories, they force the policies to change, the movements to be more inclusive, and even help impact the way children of young parents are able to access services on their own if they need them.

Tell us about #NoTeenShame — what is it, why was it created, and how can folks support it?

#NoTeenShame is all about pushing back on this stigma. Seven amazing young moms created it back in 2013 (I was invited to help out a few years later) because they grew tired of being made to feel as if the media, politicians, educators, and other parts of society were silencing them.

It was created, in large part, because of the Candies campaign that drastically shamed teen mothers. It created false narratives and inspired #NoTeenShame to share stories about how young motherhood had shaped us and actually helped us become better people.

Young motherhood certainly did that for me and the best way people can continue to support #NoTeenShame is by allowing open discussions to take place. As I mentioned before, the issue with young parenthood and shaming is this notion that success stories don’t exist.

There are so many times where people go “AND you’re a young parent? WOW,” when I talk about my accomplishments. While they mean well, it’s largely influenced by the idea that young parents aren’t meant to succeed — as if it’s a grand accomplishment to do what we do because our stories aren’t being told, or we’re not being given the platform to exist outside of our small circles.

And that’s what #NoTeenShame is doing; providing a platform for these stories to be told often, so we aren’t seen as outliers. This is just what young parenthood looks like.

Amelia Lopez is a freelance writer and mom of two. She handles social media for FutMexNation, The Mexican Soccer Show and is a contributor for #NoTeenShame.